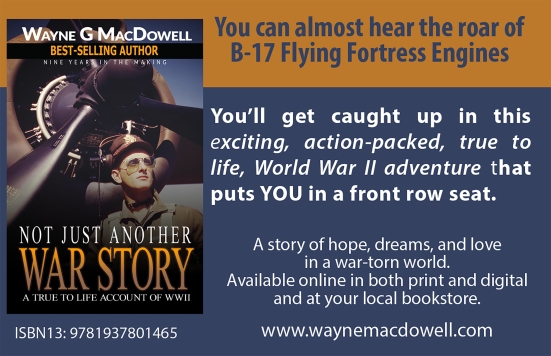 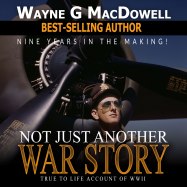 It’s been six months since the surprise attack by the Japanese on Pearl Harbor … Now, it is the Spring of 1942… Steve Carmichael has just graduated from the University  of Florida. From the time he was a boy growing up on a Central Florida cattle ranch, he has  been flying. His Dad had purchased an old mail-route bi-plane when Steve was 11 and,  within a year, the youngster was soaring with the birds in the airplane. As young men go off to fight in the war, Steve places a professional baseball career with the Detroit Tigers on hold…making the decision to join the Army Air Corps—his desire  is to pilot the four-engine B-17 Flying Fortress Bomber into battle.

Join Steve as he works to complete the difficult military pilot training and preparation  for what is to come. Meet the members of his Crew…and the British nurse Steve meets at a  USO dance…she is Margaret Steele from England’s Isle of Wight. It’s hard not to  fall in love with “Maggie”!

You can almost hear the roar of B-17 engines when you fly along with Steve and  his Crew as they do battle the dangerous sky above occupied Europe. Each of the 25 bombing  missions flown is an authentic 305th Bomb Group raid on the enemy. Experience the  action-packed air battles as the airmen try to survive…only to fly into battle on the next mission  with the possibility of being shot down over enemy territory, evading capture and making it  safely back to England … will Steve make it home with the help of the Dutch-French Underground?

Not just Another War Story is about life-love-hope and dreams during a war-torn world.  The story will give you an inside look during this most difficult time in history.

Click on the book cover below for more information at Amazon. See the 5 Star reviews. 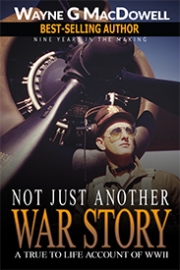